As I'm sure it is for many people, Trick or Treat is our final October tradition.  How our family does Halloween has been the same for us in the last few years, especially now that we have little miss.  It is a family affair with many of my husband's family members coming out to our neighborhood.  We walk along together and get to see the kiddos run up and down the streets and be their adorable selves at house after house.

That tall guy there?  He's the best.  While I was trying to take care of a million things, he was off taking care of himself and his sister.  He even offered to help with her hair.  And when it was more difficult than he bargained for and I stepped in?  Well, he just grabbed my camera and made sure I was in the story too.  Good guy. 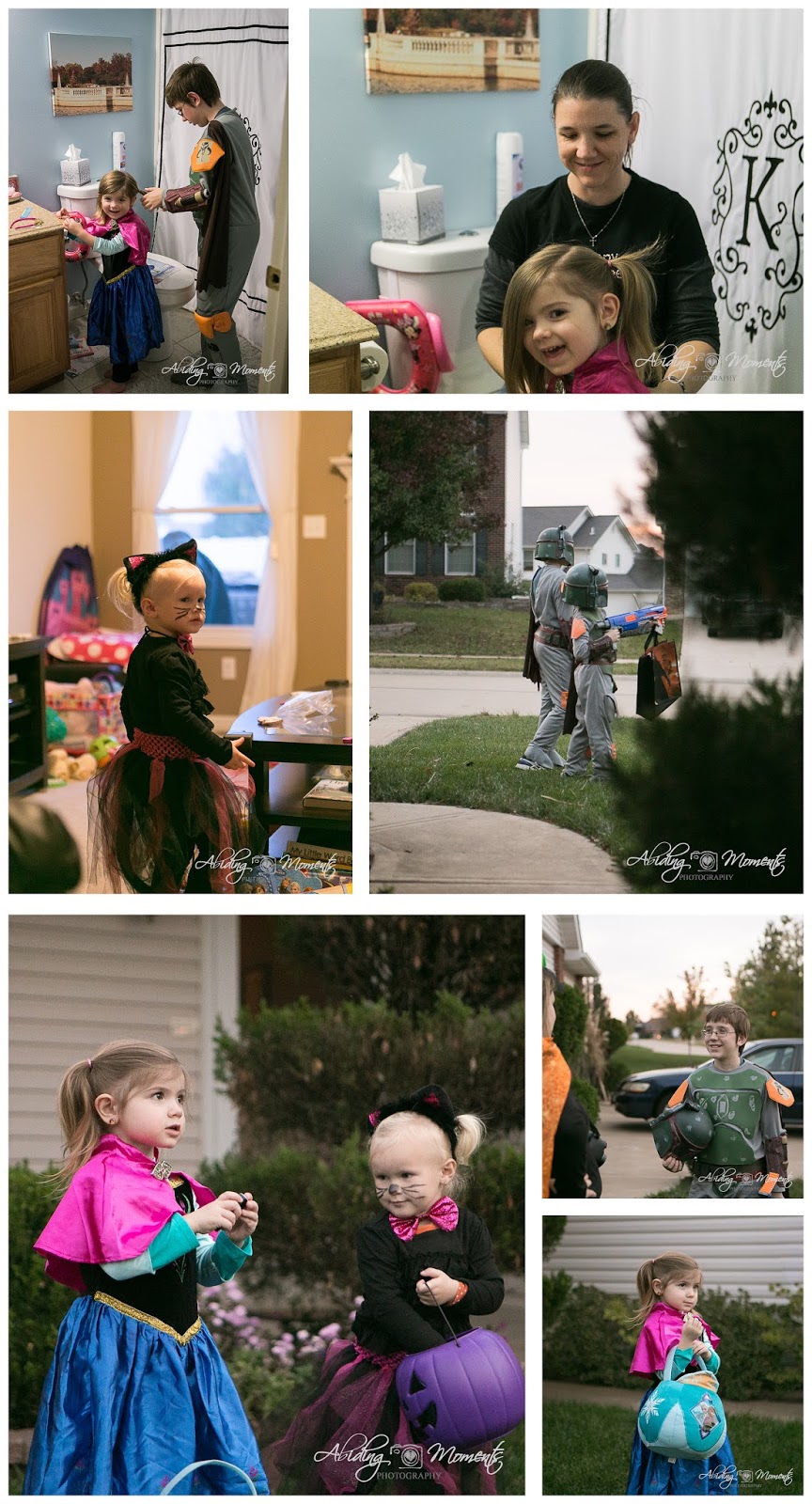 The story is so often in the details of people: the side glances, the half smiles, the adorable way they interact.  I think so often we miss this now a days and I love so much to catch it.  I think it tells an important layer to who people are. 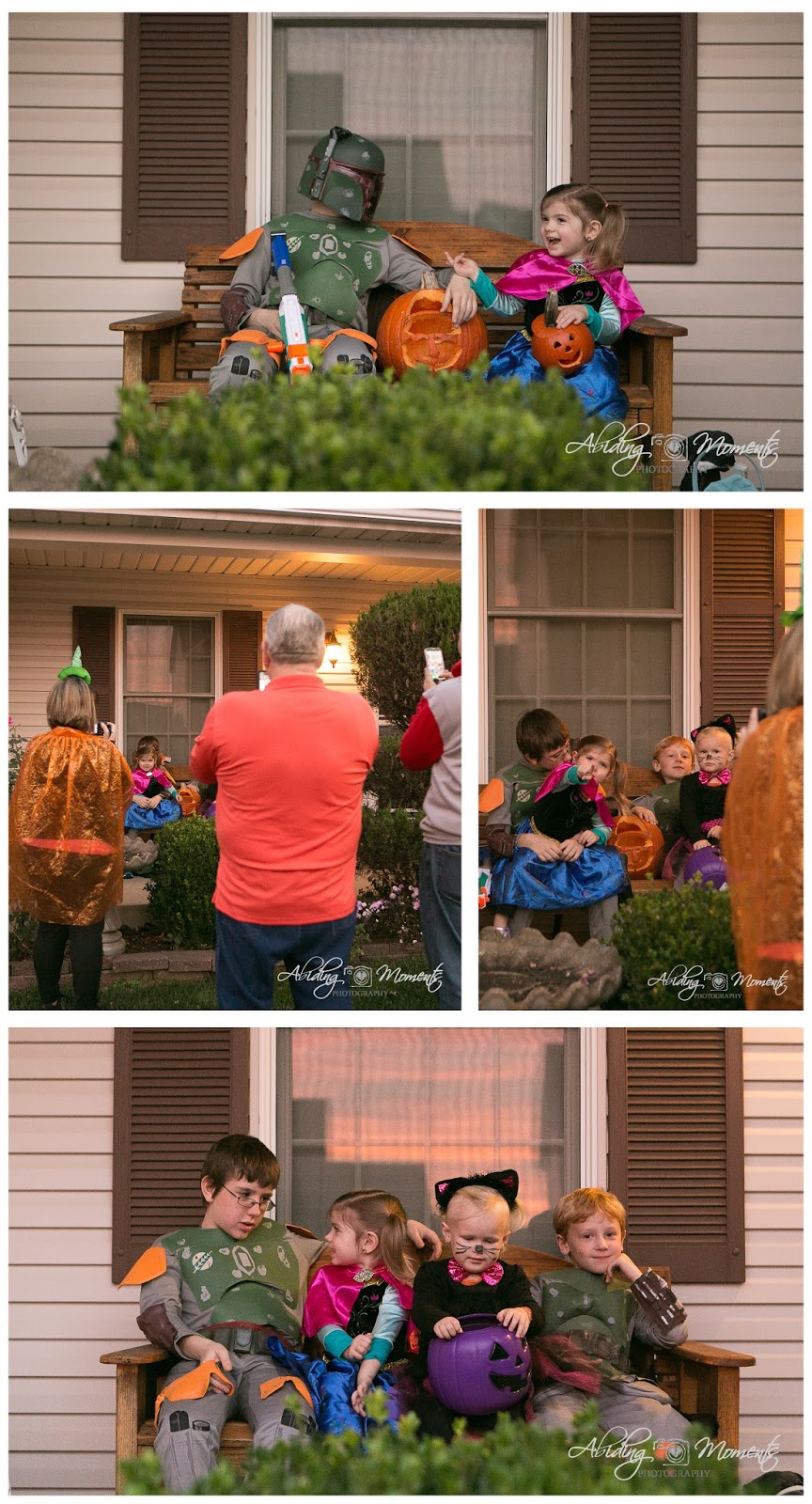 Ahh the challenges of getting straight on looks and great smiles from little people.  Yeah.  I'll stick with the adorable interaction instead.  Side note: those matching costumes were not planned.  And, in fact, my nephew knew that he was Jango Fett, the son of Boba Fett from Star Wars.  So, really, they were different characters - just in case you were curious.

And then we were off!  House after house, street after street.  Our kids were adorable and enjoyed the snot out of it all. 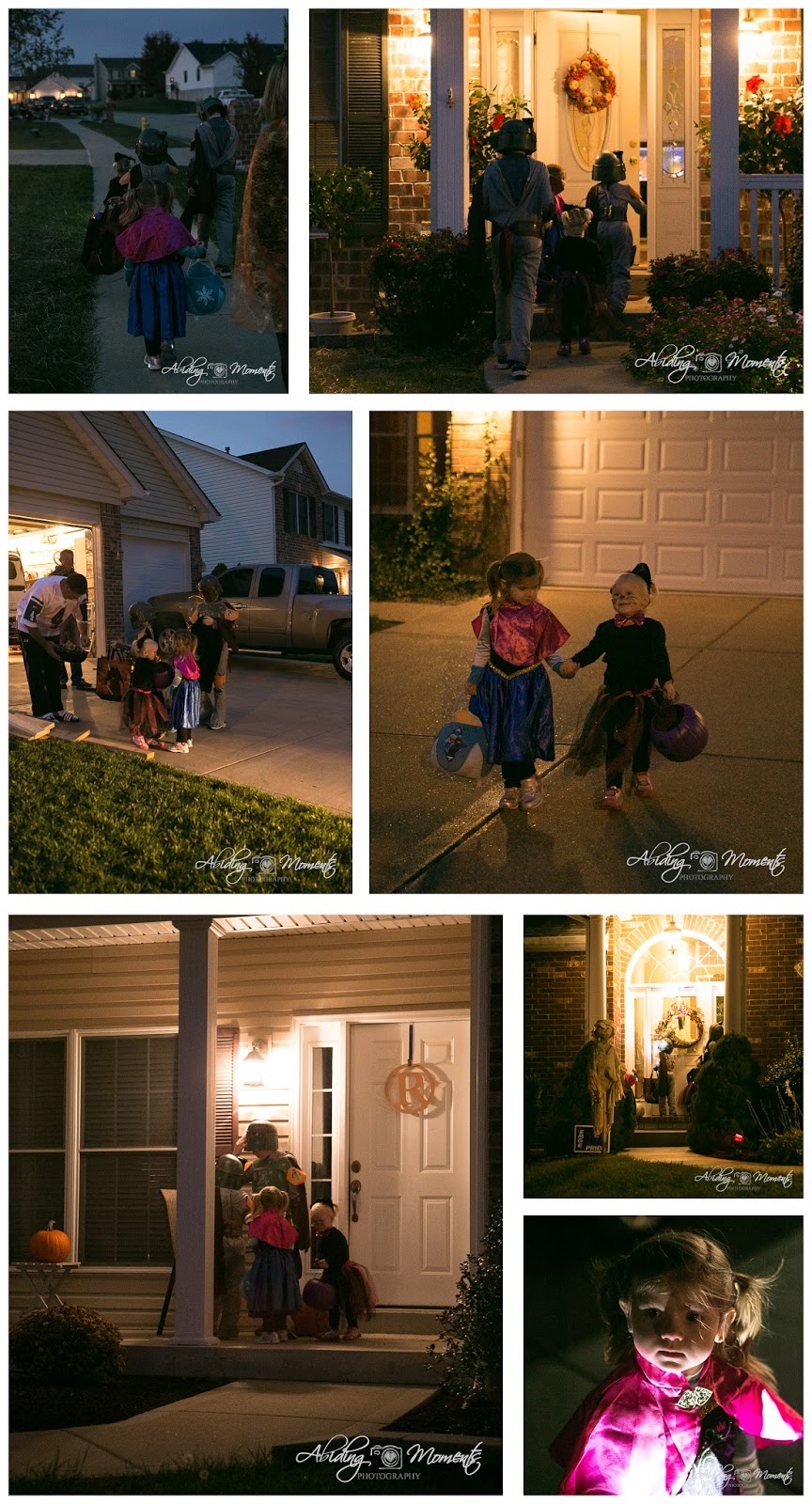 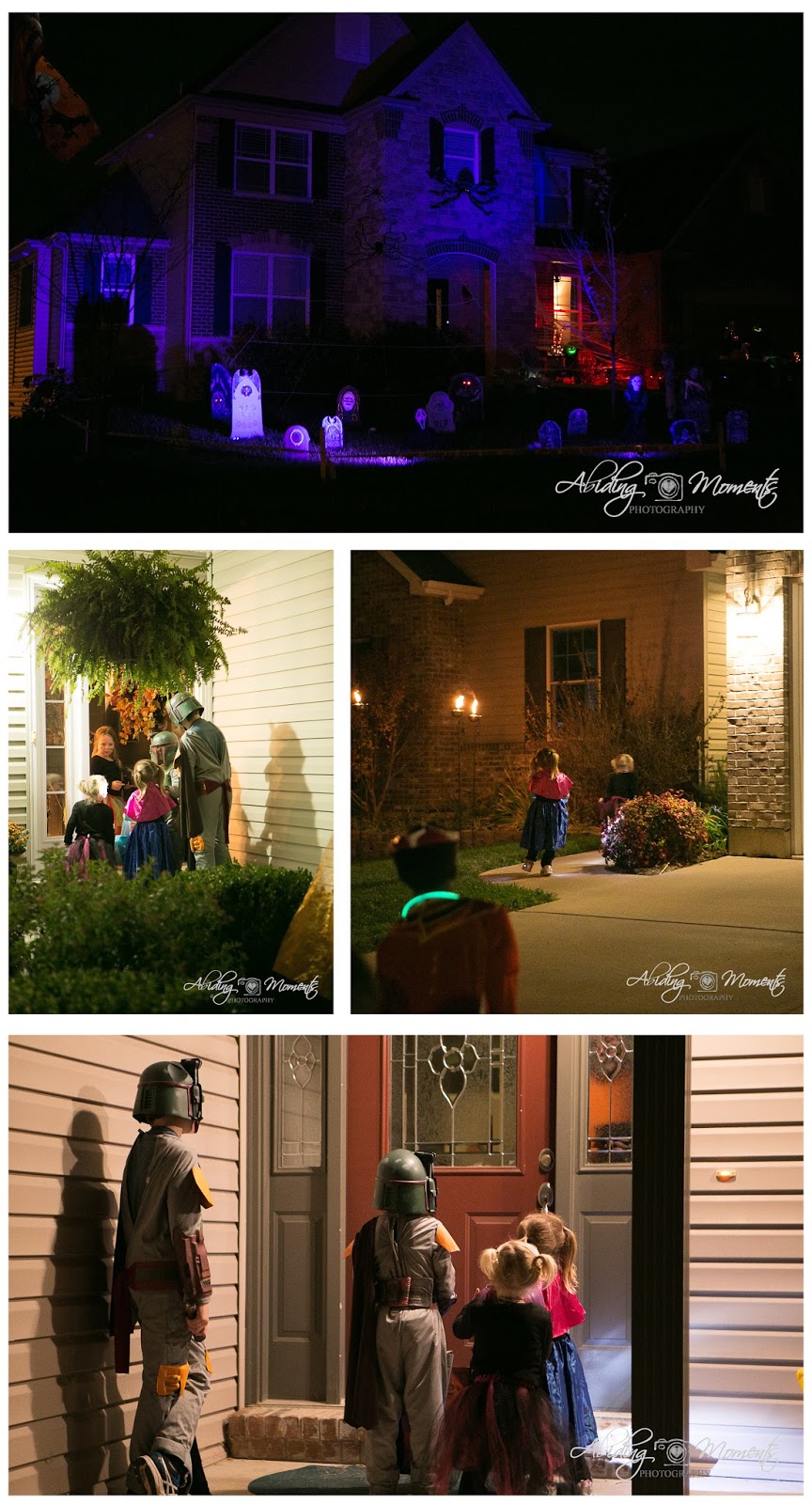 I was very proud of those young men.  They paced themselves for those little ones and rarely left them behind.  They even let them take turns on pushing the door bells.  Of course, if you know those young ladies, you will also know that those girls were very vocal about having a turn, soooo.

Every Halloween night must have a candy stop.  Especially for little legs.  And maybe for this Momma's legs too.  Along the walk, there were so many cool pumpkins out there, too.  But the DEATH STAR?  I mean, really, winner hands down, right?  Bonus points that the dad was Kylo Ren and the child was Darth Vader. 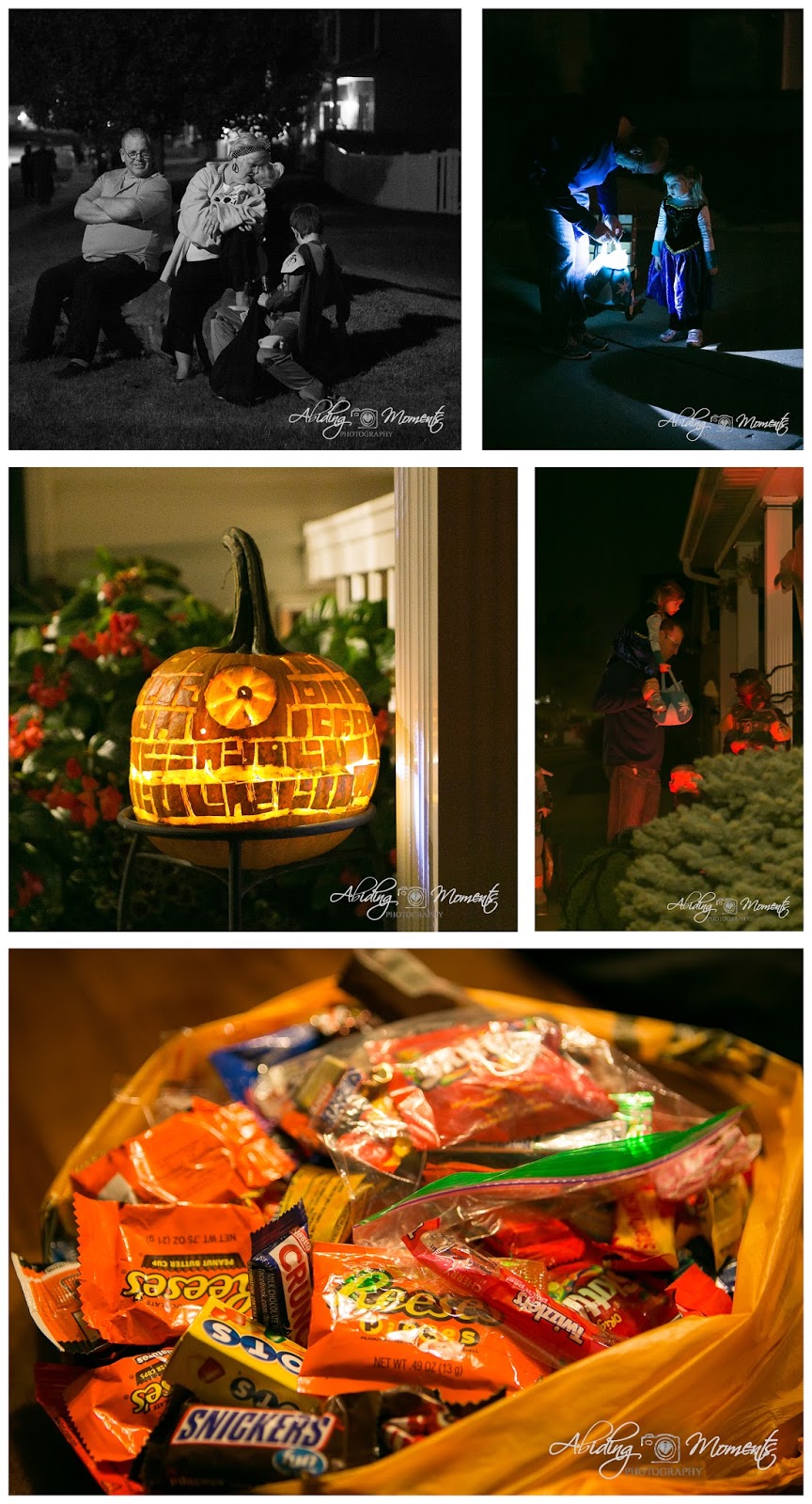 And what Halloween would be complete without a shoulder ride from Daddy?  Such great times.  Plus our final loot.  Hopefully it will last us well into the new year.  Or at least until the end of this one.