Last year, while hunkered down at home, Emma learned a TON about the history of the 50 United States and the start of our country.  And since she was virtual schooling in our living room, I got to listen and learn along with her.  If I'm honest, as a student, I always hated history.  It seemed so boring and irrelevant to my life.  In my late 20's, however, a visit to Washington D.C. changed that for me.  I saw pieces of history in front of my eyes and I couldn't deny that it was amazing.  I began to have a much greater appreciation for the history that existed in my world, and have since become more fascinated by it.  As Emma learned last year, my eyes opened even more to the beauty of our country's history.
For over 20 years, I have lived a mere 20 minutes from St. Charles, MO, the first capital of Missouri and starting point for Lewis and Clark's two year expedition to the West.  Here, history is literally on every corner of Main Street, which is still a brick road.  For decades, the city has been a historic area full of block after block of small businesses that were once homes, hotels, shops, and more.  Every Christmas, the area steps back in time as they have what they deem an outdoor festival every weekend in December.  Characters from Christmas past, both fictional and historical, are dressed in time appropriate clothing and wonder the 8 blocks with trading cards for children to collect.  When you meet them, they tell you about the history of different Christmas traditions from their countries and time periods.  It. Is. Magical.
This year, with a more historical perspective & appreciation for simple thing, the details that I might have missed before, now stood out.  As we walked the blocked streets, I paused to take in the houses, 100's of years old, many decorated with simple greenery and bows. 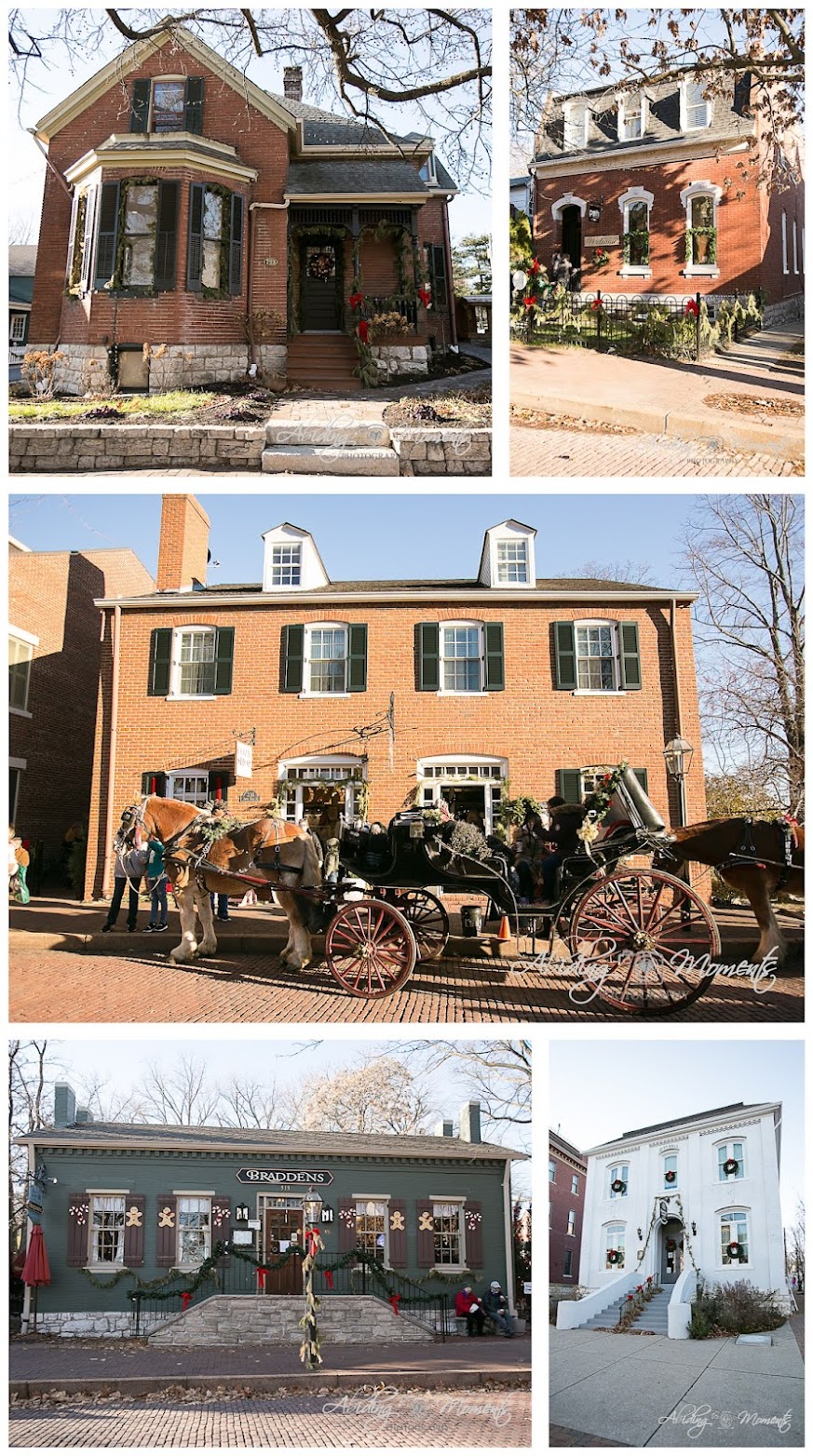 Another simple Christmas tradition that overflows on Main Street are the groups of Christmas carolers at every turn.  Not only do they look smashing, but their voices and personalities are FANTASTIC.  My dad would have loved them! 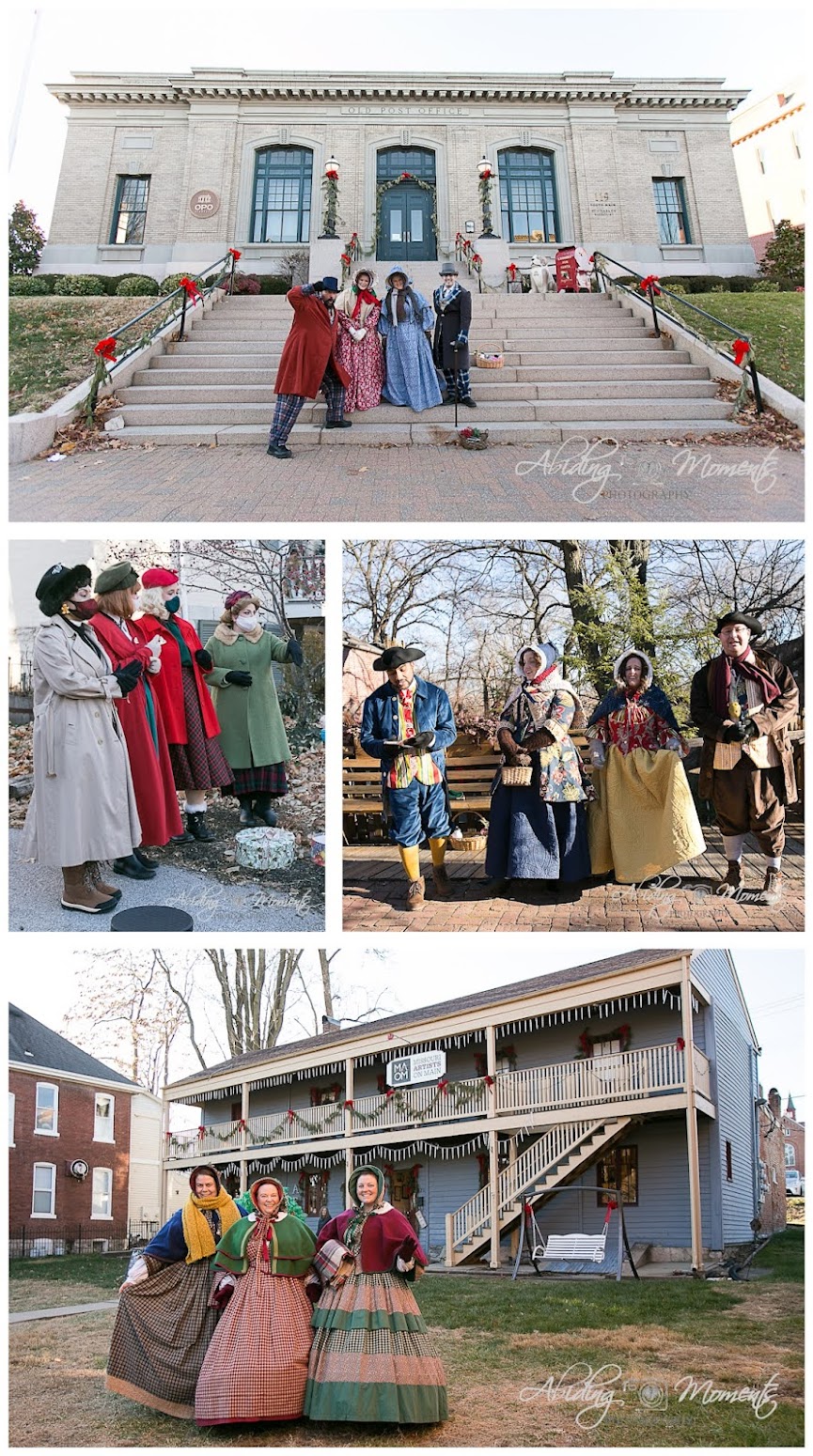 Some of the characters we saw are, well, characters!  Jack Frost has a very pun-filled and sarcastic banter about him and is always a favorite!  We saw several characters from Charles Dickens', A Christmas Carol, including the Fezziwigs, who were Mr. Scrooge's boss from his Christmas past.  We watched the inventor and toy maker, Herr Drosselmeyer, interact with his creation, the Nutcracker Prince, who inspired the 1816 tale The Nutcracker and Mouse King.  We also saw many four-legged friends, definitely a popular guest families bring along, as well as getting to take pictures with the Sugar Plum fairy wings painted by a local high school student for young visitors to enjoy! 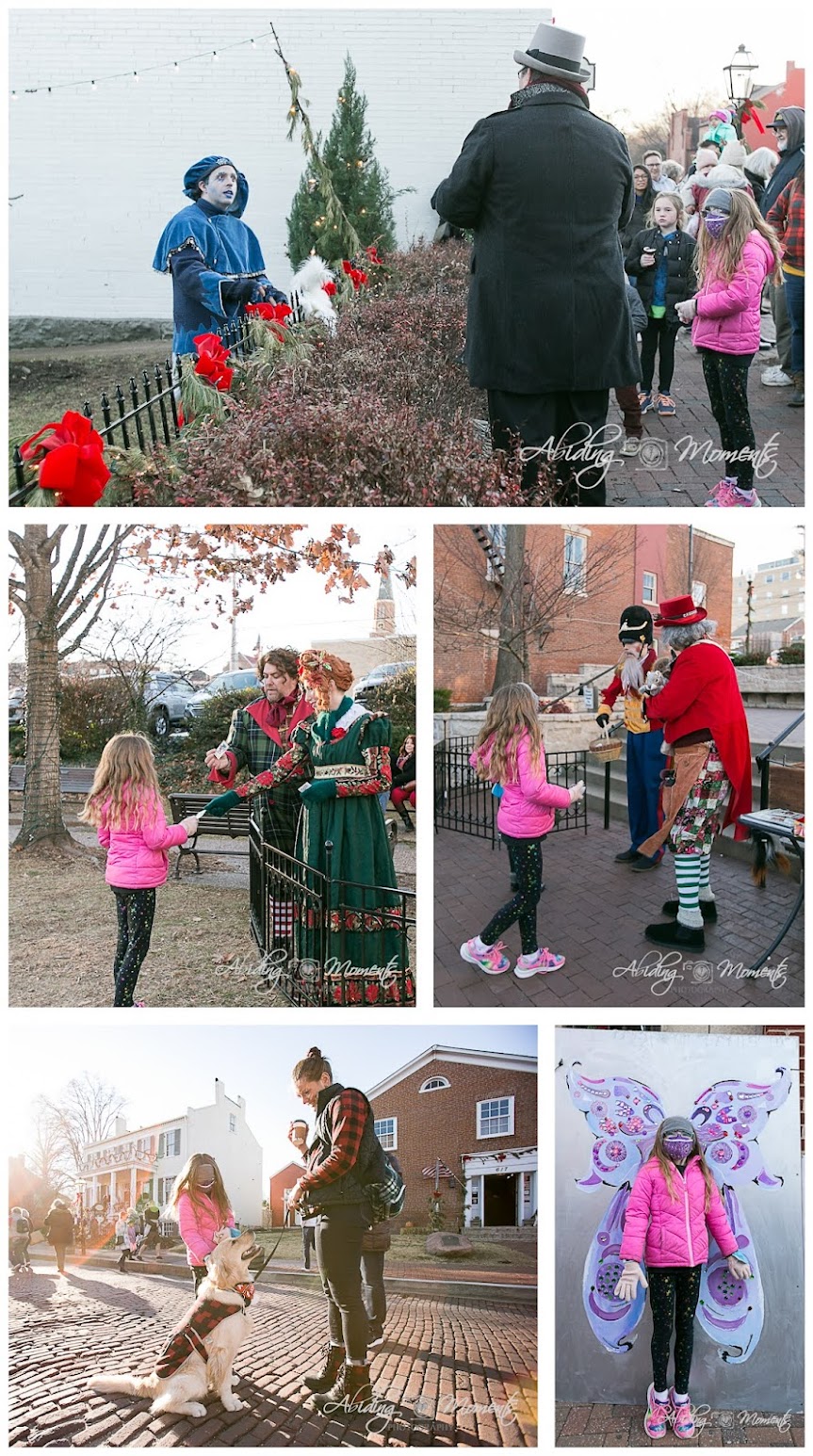 Of course, what would the traditions of Christmas be if they didn't include the Santas from history?  We got to meet and learn about the Civil War Santa, Pere Noel from France, Father Christmas from the United Kingdom, and Saint Nicholas - the bishop from ancient Greece.  We learned that Saint Nicholas was famous for secretly distributing his riches amongst the poor (sound familiar?) and later became the story for children receiving gifts in their shoes on Saint Nicholas Day, December 6th.  We also got to hear of the Russian Snow Maiden, Snegurochka, who helps to bring in the New Year half way around the world. 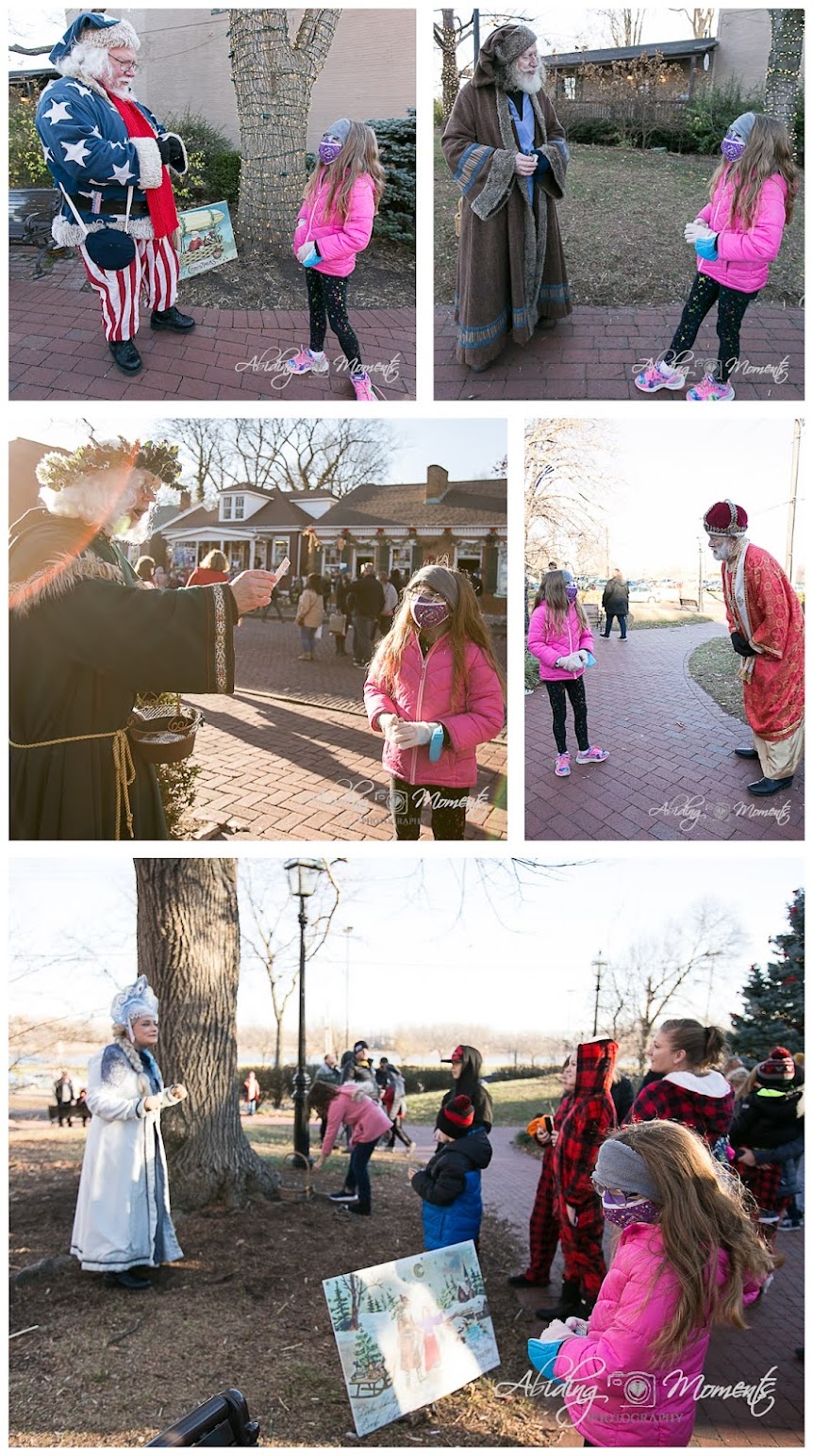 Of course our time wouldn't be complete without a stop to see the North Pole Staff, Mrs. Claus, learn a little Christmas Tree history, and finally see ... 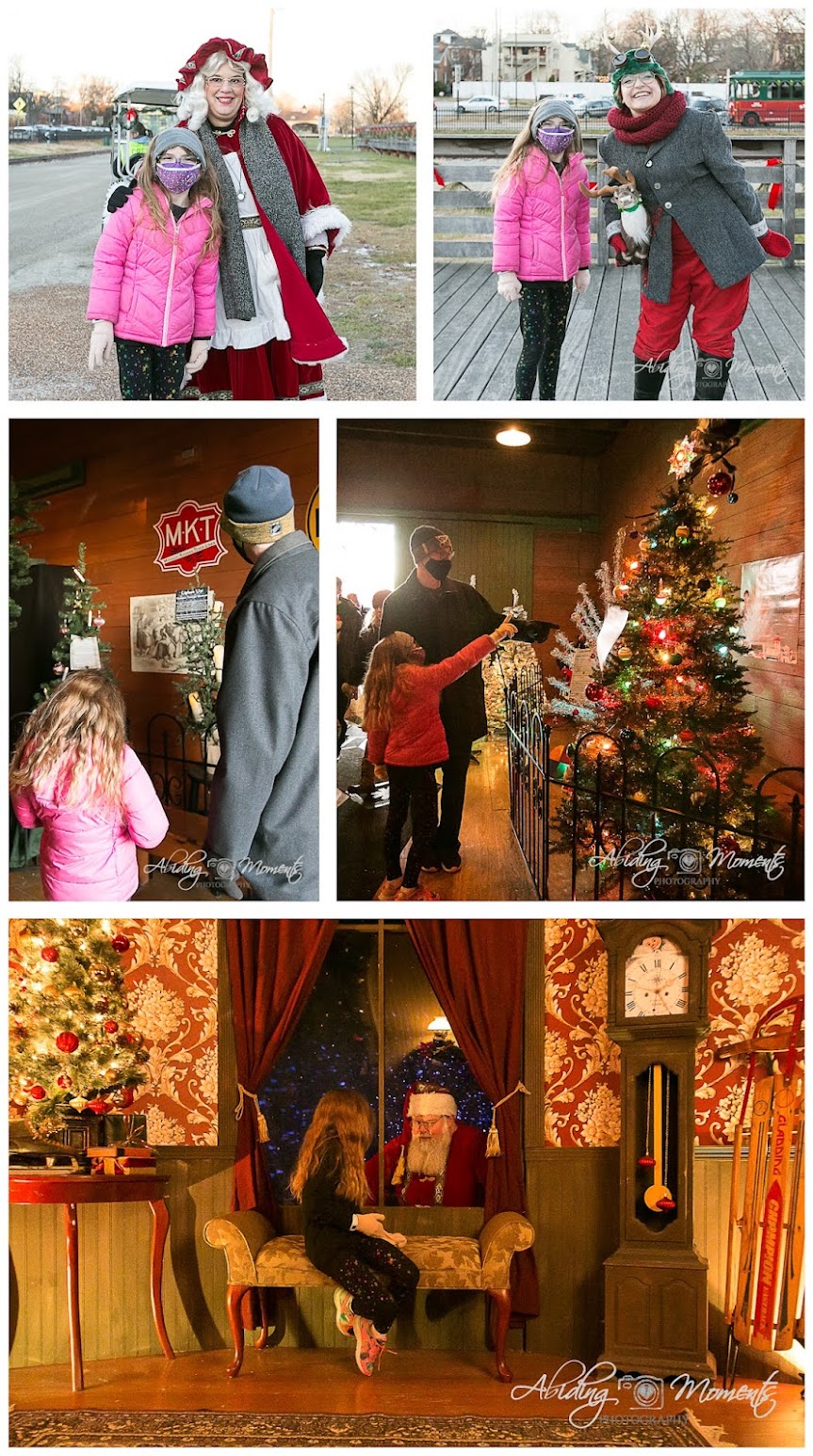 the big guy himself - Santa.  Our girl got to have a very quiet moment with Santa (behind glass) and share her simple ask for under the tree.
We were so thankful for this chance to engage in some Christmas traditions from history and look forward to doing it all over again next year!  Merry Christmas to all!