For those of you that are loyal followers, you may have noticed the very long delay in posts.  I promise, I'll talk about that at some point, but not in this post.

Our family has some wonderful neighbors and friends, Mr. Tom and Ms. Karen.  When we first moved into our house, we met Karen when she brought us over a meal after a day of moving in boxes, because that is the love of Ms. Karen.  It was fantastic to have real food and a lovely start to a friendship that has lasted well past a decade.  Our girl became good friends with Mr. Tom.  She would ride her bike or scooter on the sidewalk in between our houses and chat with Mr. Tom from his usual perch in his garage.  It became a sweet routine and constant in our lives.  I wish I had real photographs of it, but it always felt like an intrusion into their space, so I didn't ask.  I only have 1 from very far away, and I deeply regret not asking.  When Mr. Tom's on and off sickness took an unexpected sharp turn this summer, it left us all so very lost that he would not be returning to his perch.

Karen and I had talked about trying to get some photos in with their family the next time their grandkids came into town, but things moved so very fast that we never had that chance.  Instead, Karen, her daughter, and her grandchildren decided to create a beautiful memorial Fairy Garden for Papa Tom and I was able to photograph it. 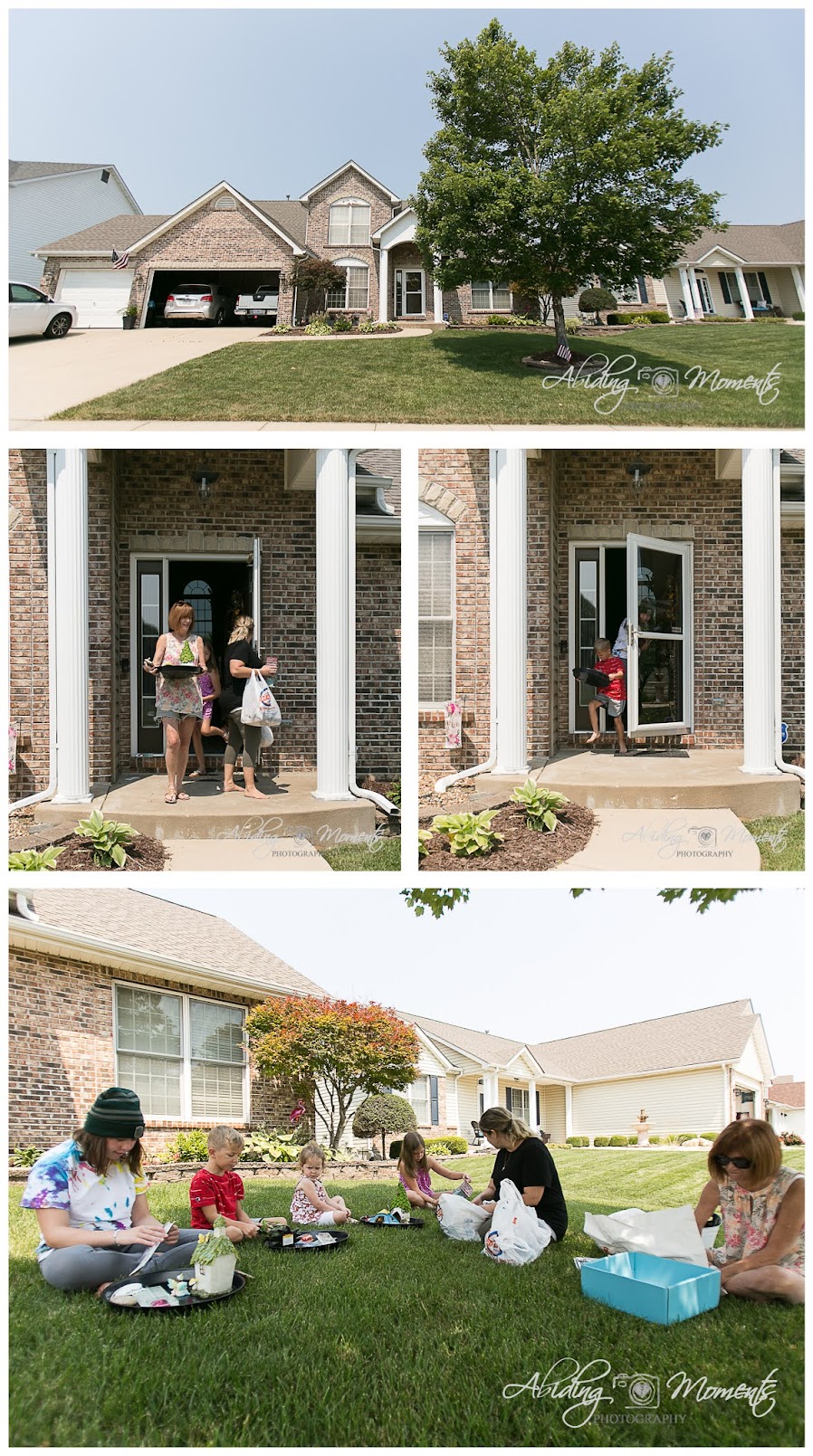 While the creating began, Kathryn, Tom's oldest daughter, and I chatted about how the beginning of this wasn't as picture perfect as it appears.  Between figuring out all the details, there were small voices that were desperate to make sure the pieces they picked in the store landed safely in their garden for Papa Tom. 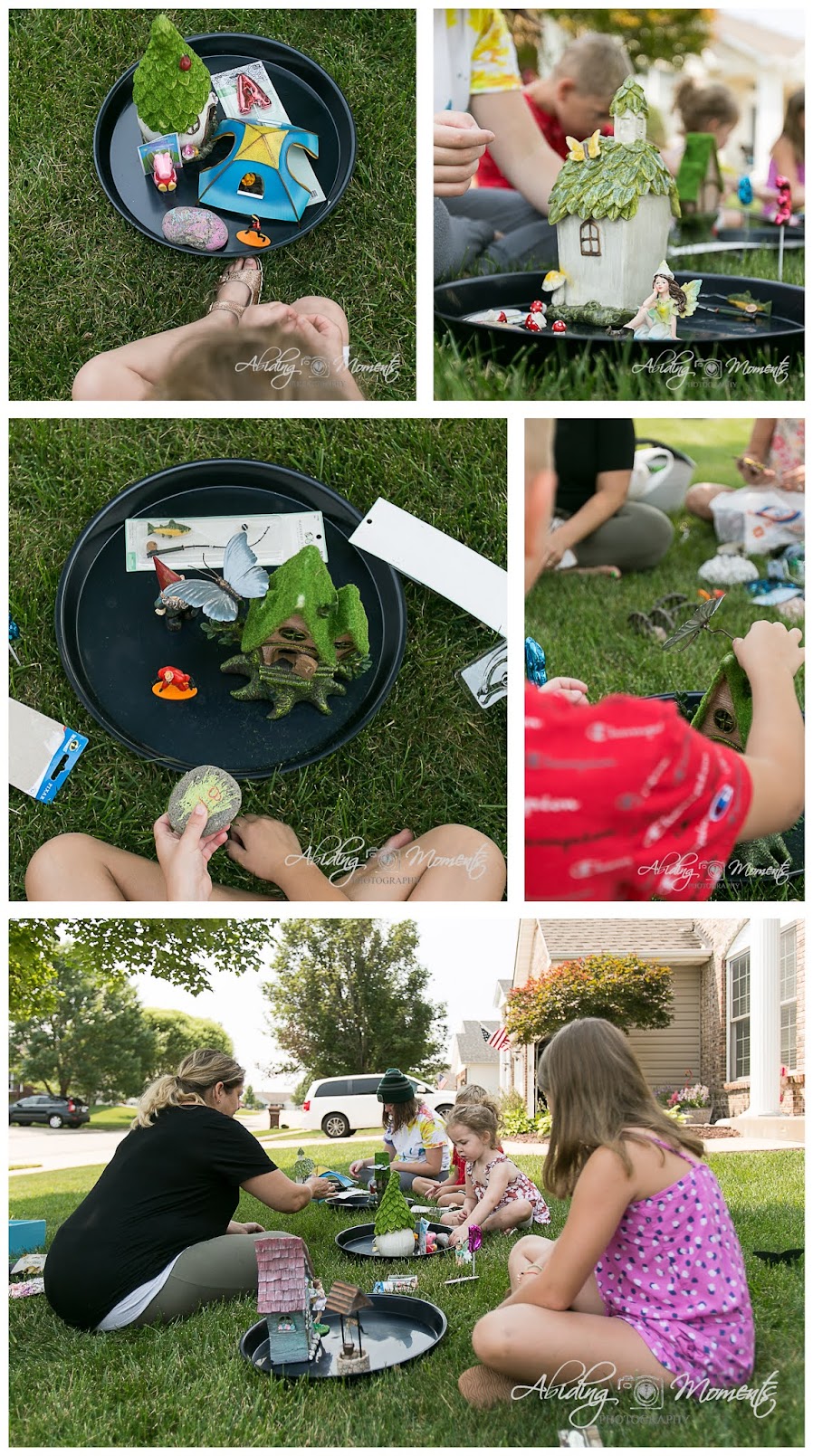 Of course, you can understand why that matters.  Papa Tom was pretty fantastic.  I have no doubt that under the normal parts of being kids, were the more sullen parts that were understanding these were no ordinary fairy gardens. 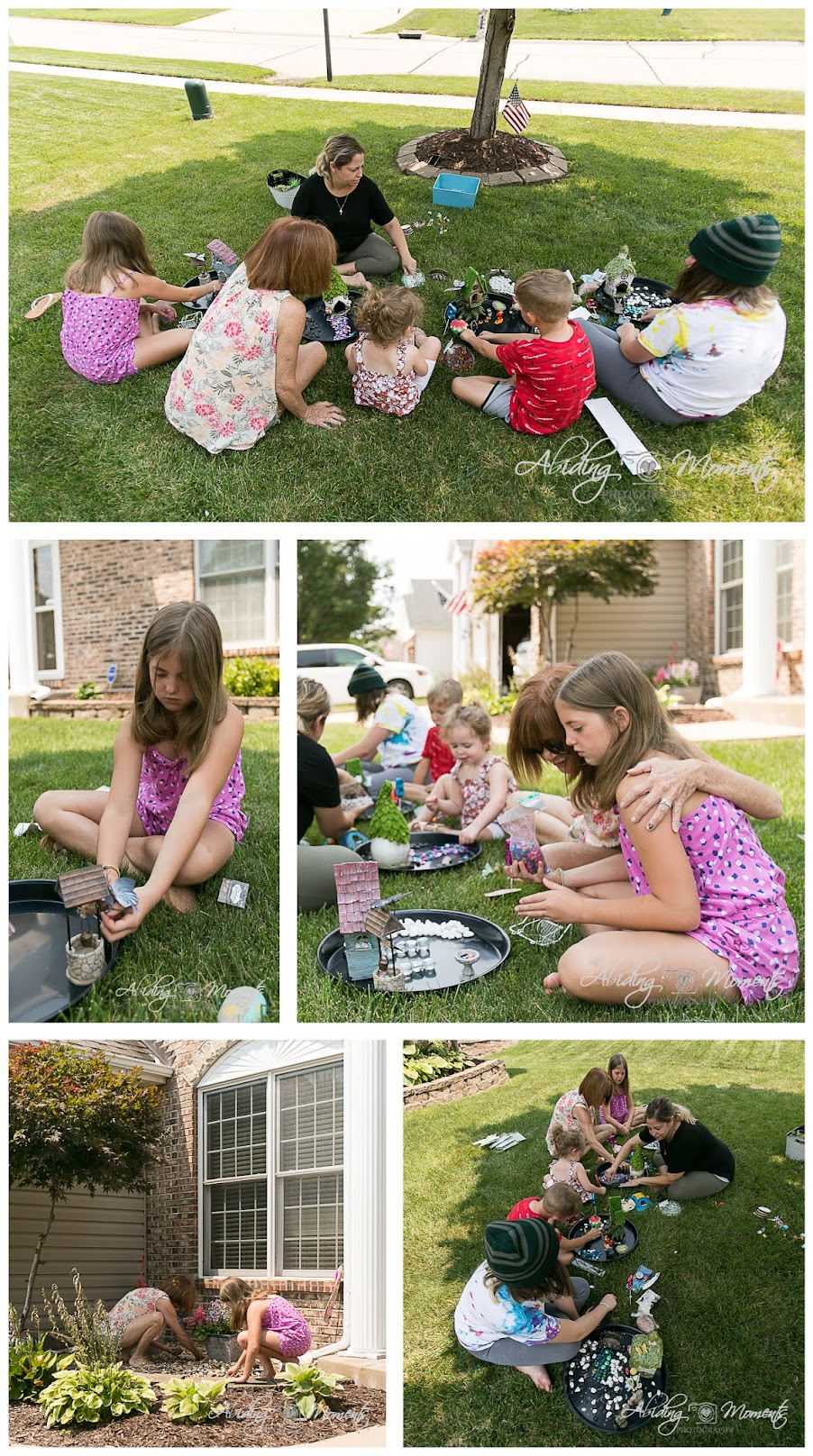 Everyone worked so diligently as they began to lay out their designs.  When rocks ran low, Karen was quick to find more with her granddaughter. 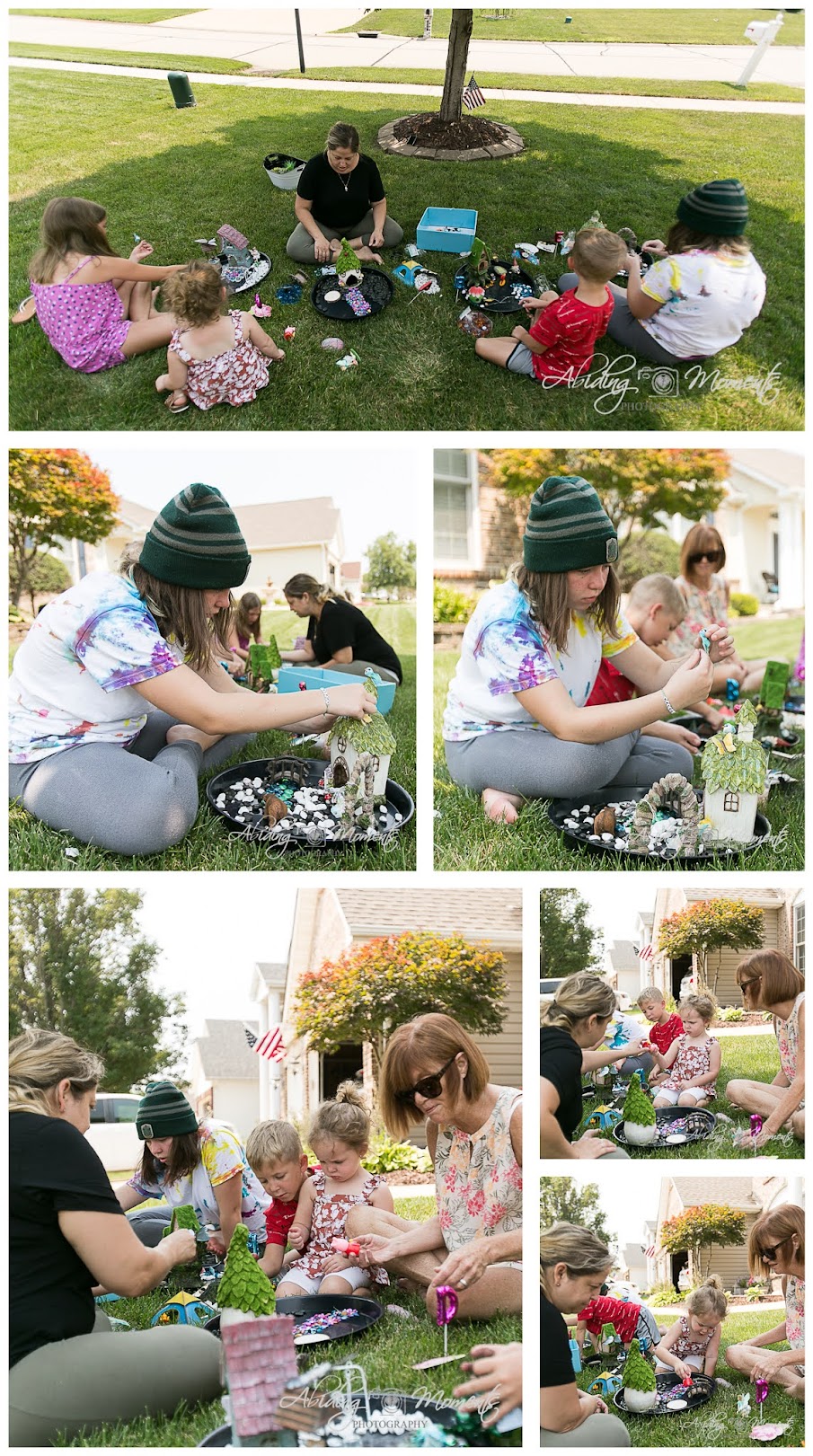 It was really very beautiful to watch the kids work on something that was so special to them.  Of course, there were still those in between moments where pieces were being held to tightly for fear of being relocated to a neighboring garden, but that was ok. 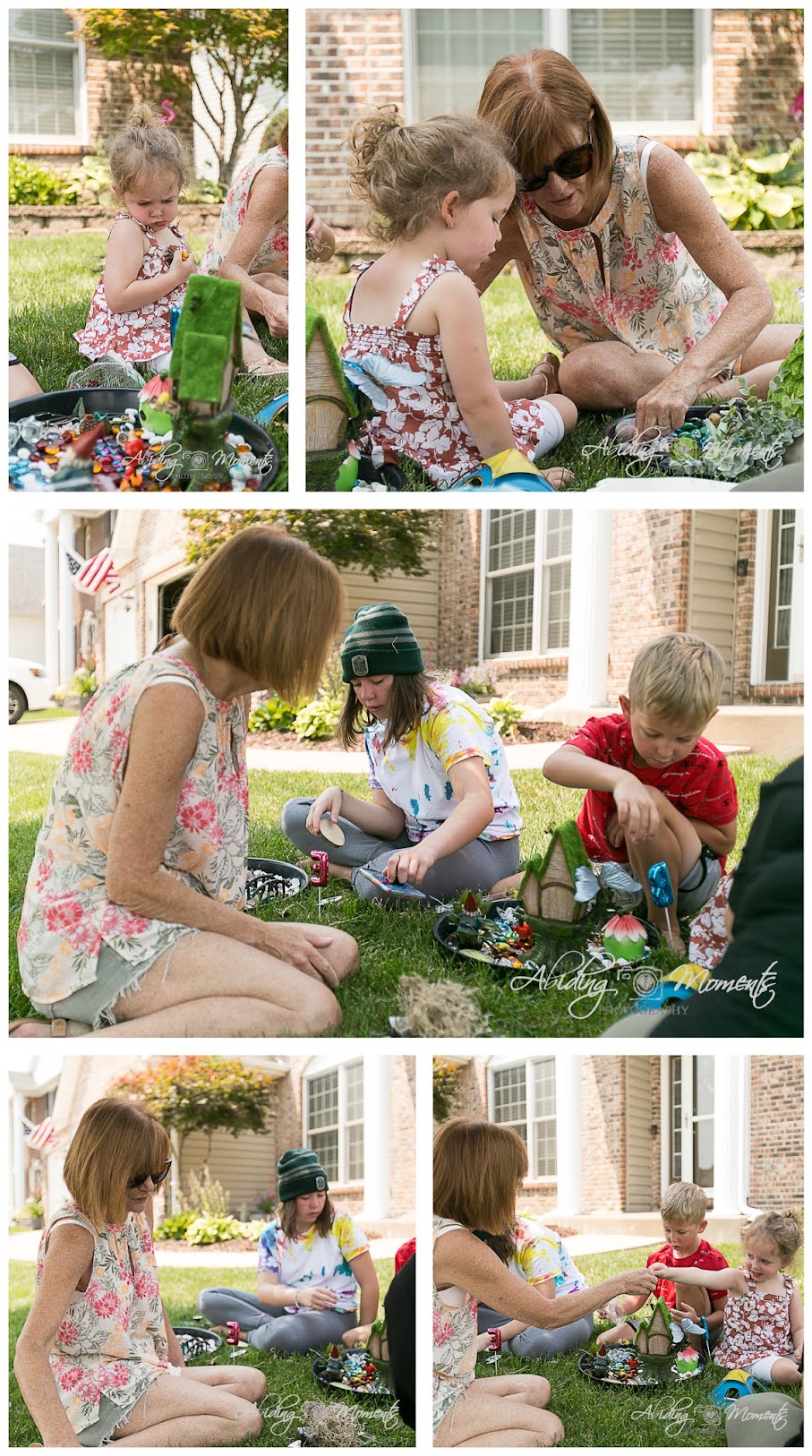 As the kids continued to work, I found myself watching Karen and wishing Tom were there with them all.  I know I wasn't alone with those thoughts.  He would have loved watching those kids pour themselves into those gardens. 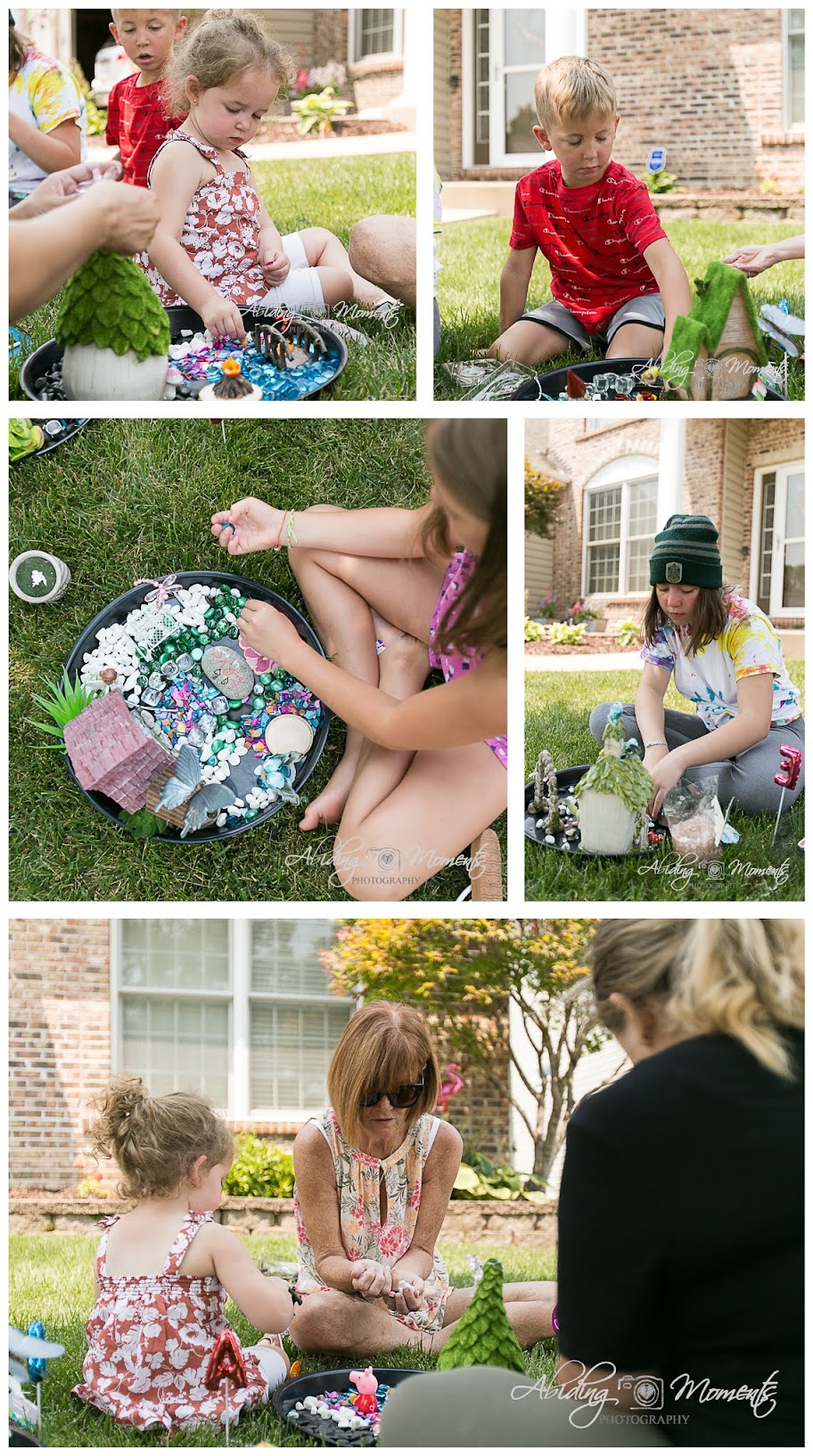 Before the end came, there was rock sharing and piece giving and lots of pride to be had about the creations they had made.  But there was just a little more left to do - picking the perfect location. 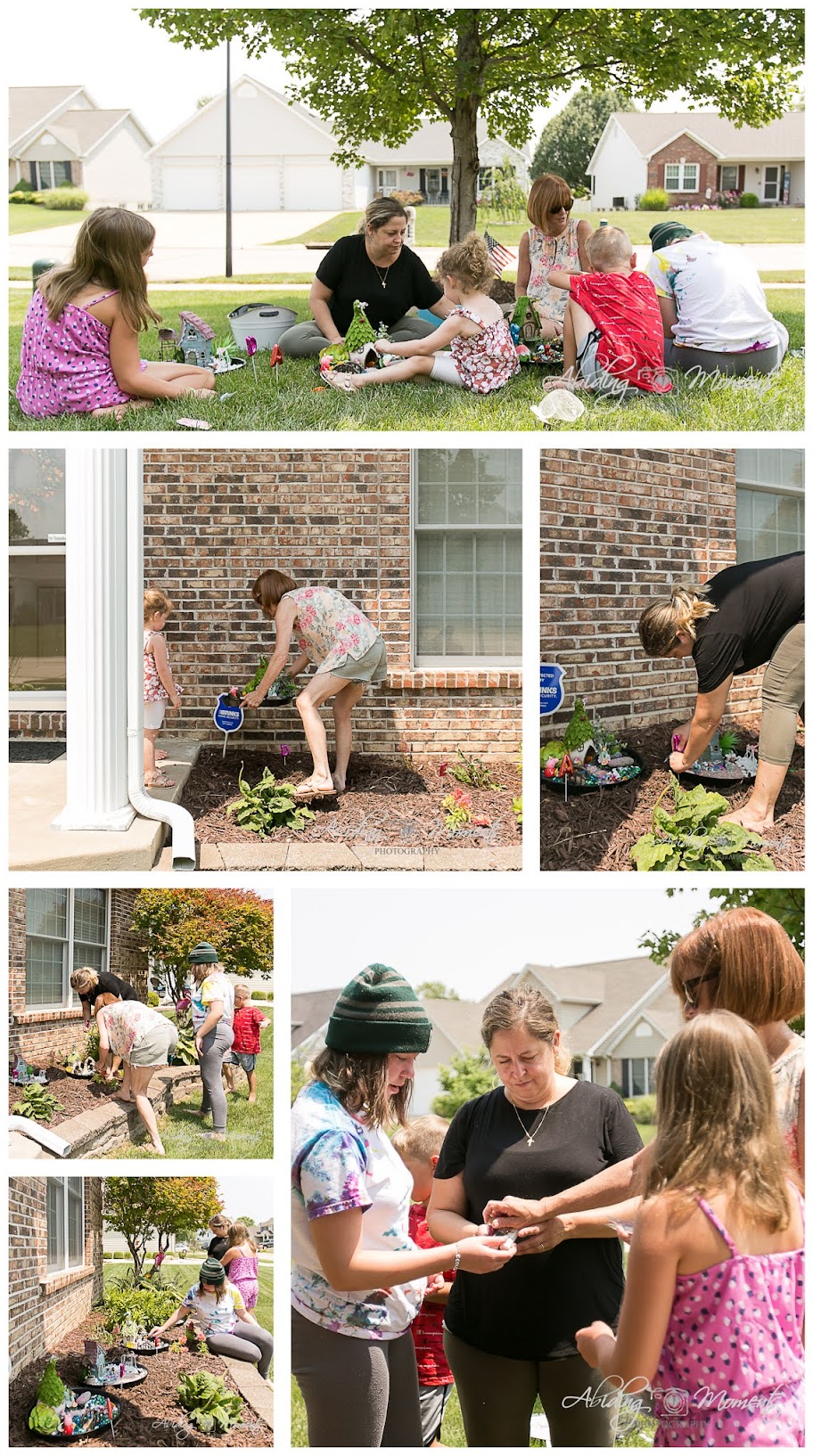 And the real beauty of any fairy garden - pixie dust.  The kids each took some and shared what they loved about Papa Tom.  I found myself catching my breath as I shot through memories of Papa Tom going fishing with his grandson or how his granddaughters just loved spending time with him and knowing that he was so kind to everyone.  Indeed.  Emma and I would second that. 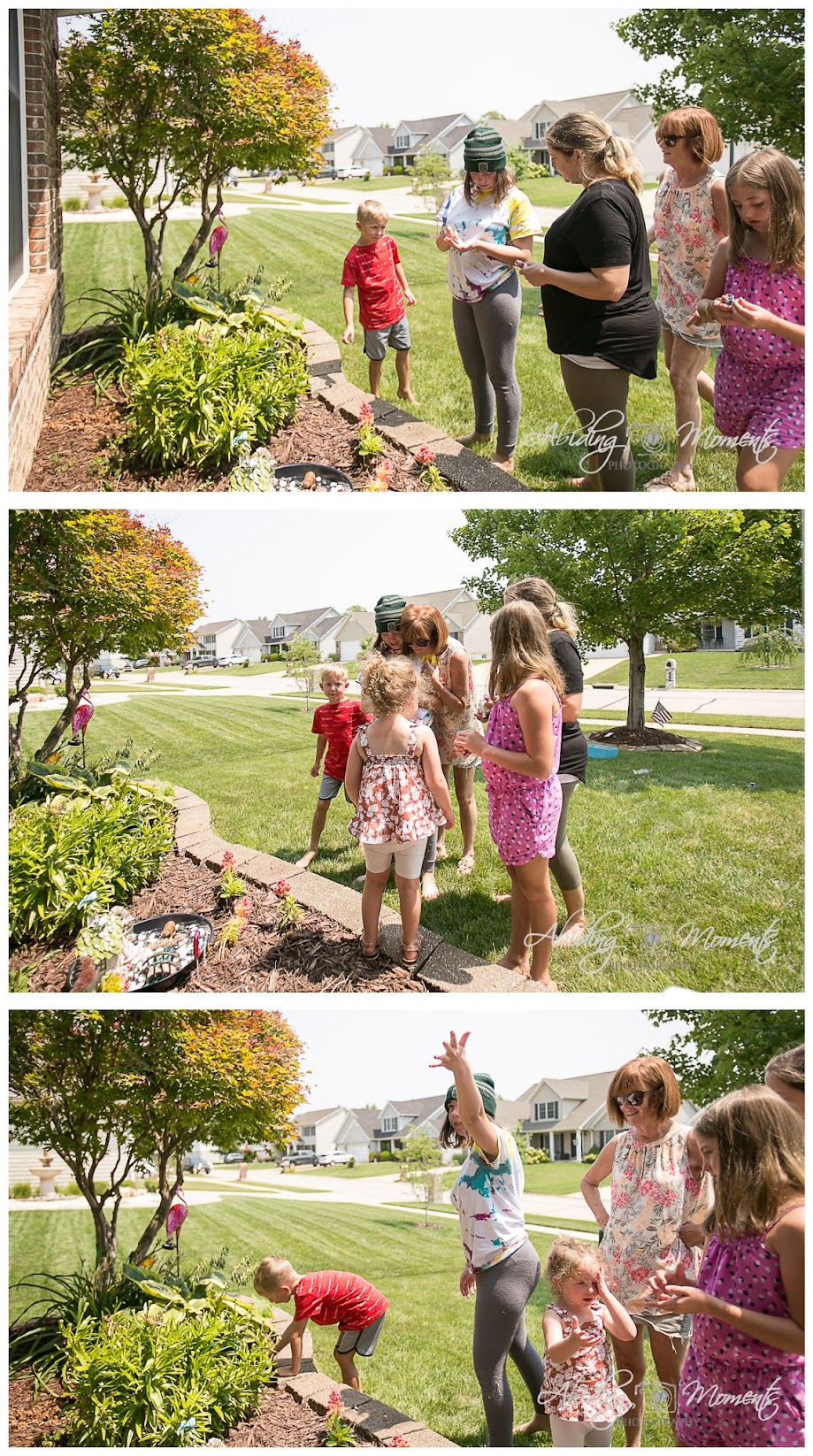 The glitter caught the sun and the wind and scattered everywhere.  I loved to watch it fall and think that Tom was all around.  I could see him poured over each of those beautiful children he was a part of. 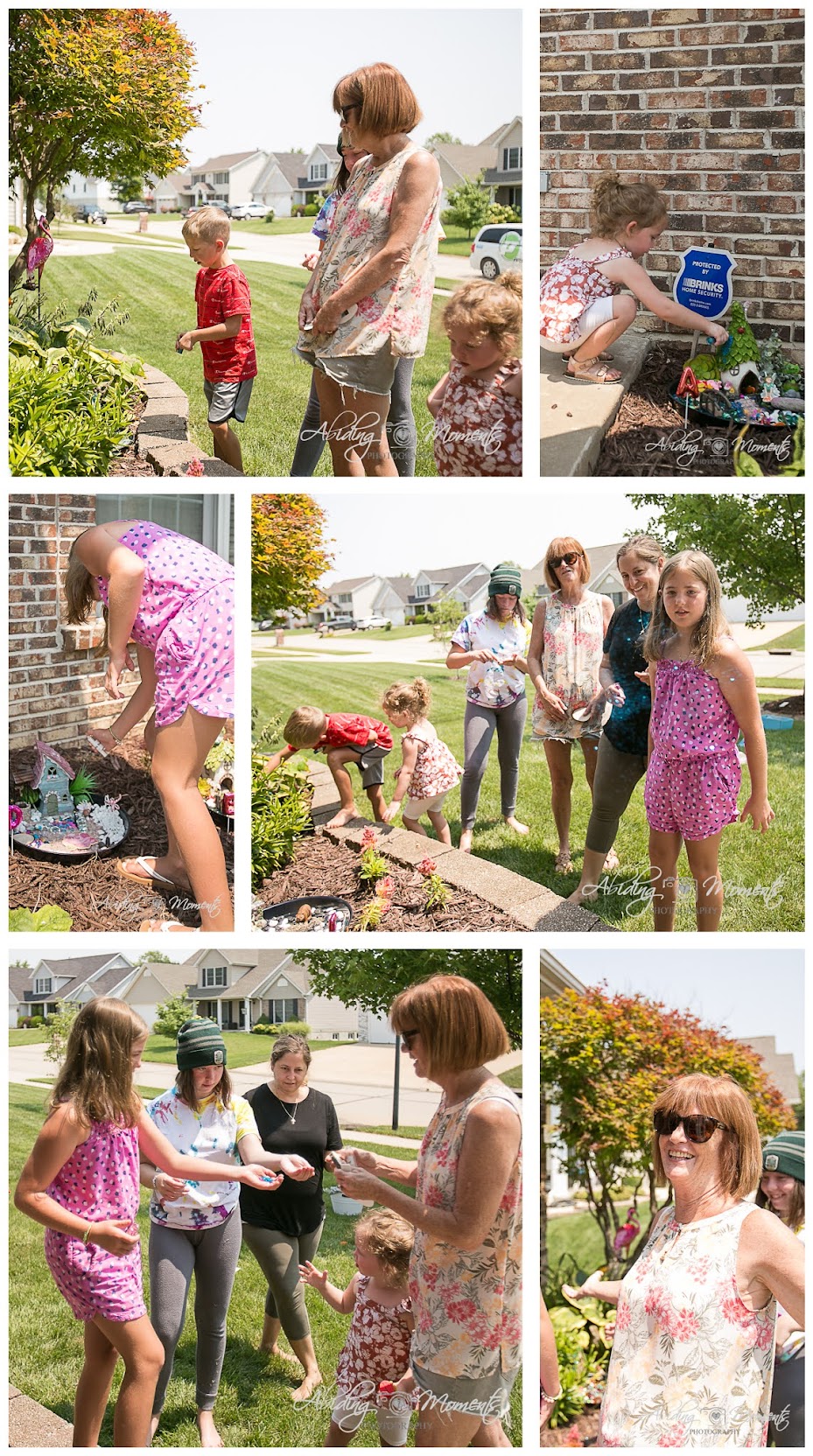 The final products were so beautiful and such personalized pieces to hold memories the kids shared with Papa Tom. 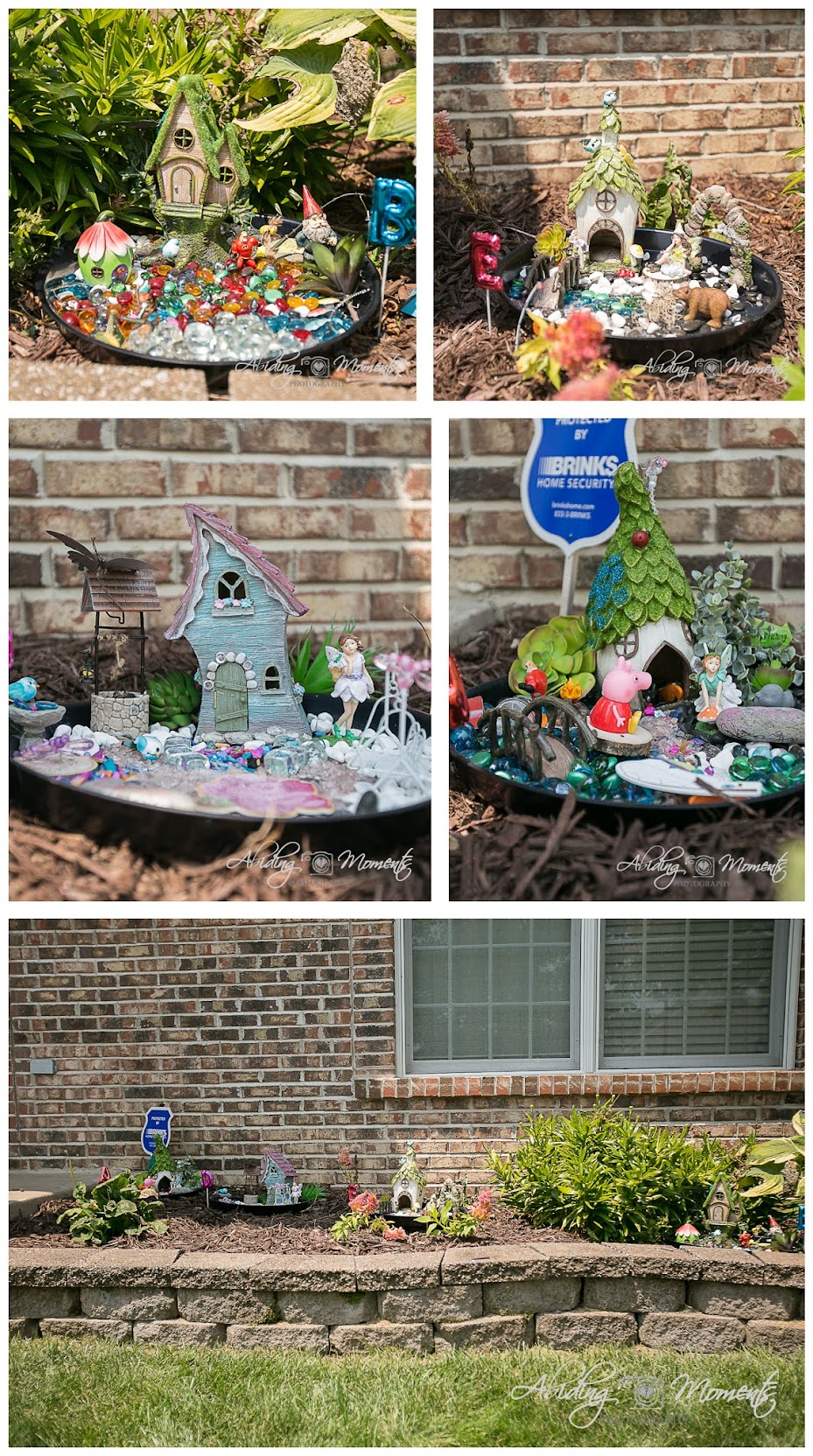 There was one final send off with glitter to the wind. 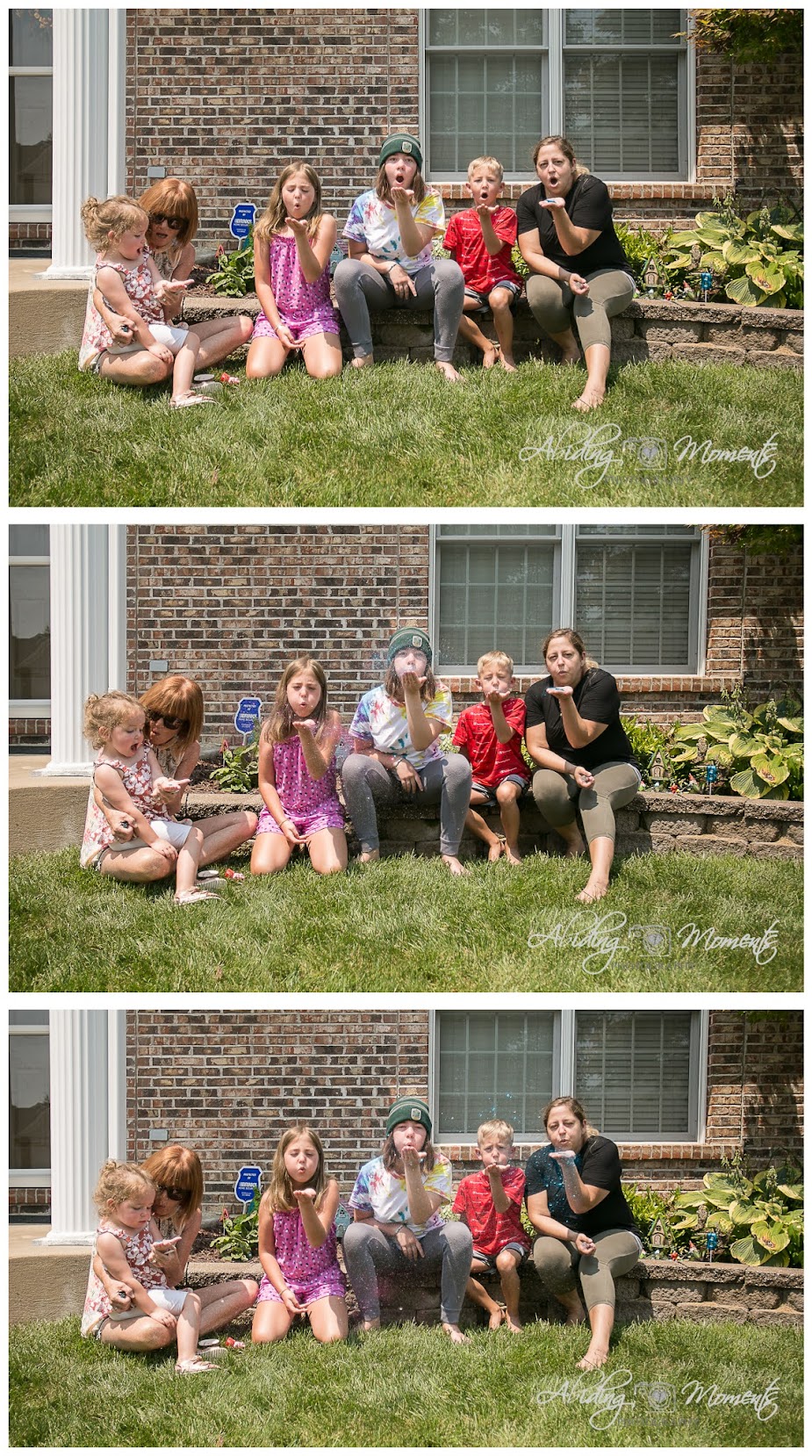 And a for sure feeling of all the love felt for Papa Tom that would remain behind like the glitter of the world.